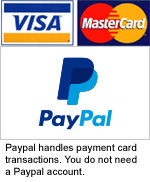 Number of ratings: 1
Average rating: 5
Excellent
from Anonymous on 09/10/2016
I have only seen the products on display and demonstration but what I have seen is very well designed and very very reasonably priced